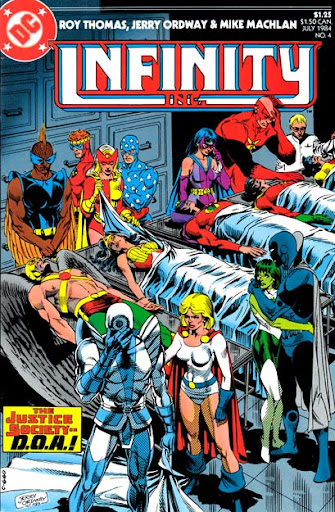 Origins and Outcasts Infinity Inc #4 Cover Date:  July  1984 Released:   19th April 1984 This is still set up, this time Jade, Obsidian and Northwind, so apart from the cover Kara only get's one panel near the end. Oh, and out of interest I checked and Generations basically lasts a full year (12 issues) so I'll stop babbling on about how everything is just set up. That's 1/4 of the run of the comic, which is an impressive show of confidence from Roy. It's also most of the appearances Kara, so we're be leaving the book more or less when Kara does. The others are around Crisis which is a different kettle of fish that we'll get to when we get to it! So enough stalling onto the story! We start with Jade, Obsidian and Northwind taking Solomon Grundy somewhere in the protective bubble Jade formed the last issue. To pass the time they basically start to tell each other their backstories. Jade start off with her being a regular kid growing up in suburbia, apart from the
Post a Comment
Read more 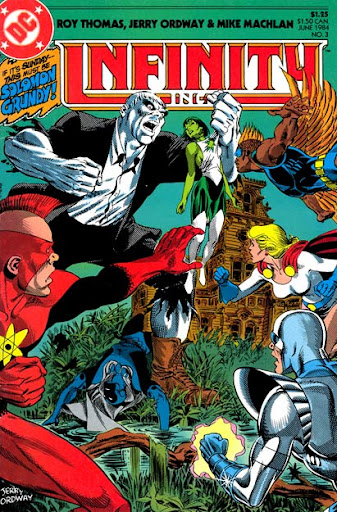 Solomon Grundy Goes Hollywood Infinity Inc #3 Cover Date:  June  1984 Released: 22nd March 1984 We start we the Power Girl waking up, and for the first few pages, she really takes the lead waking up the other two (Huntress and Star-Spangled Kid), though waking them up by flying in the fresh air is a little dubious at best. As the three recover from the last issues mind whammy we get a quick summary of what happened previously. They then tell us about all the adventures in 1942, in a couple of pages, fighting the wonderfully named Lady Ultra-Humanite.   As a quick aside I find it fascinating that the original Ultra-Humanite brain transplant was into Dolores, I know it's a pulp thing but from my (limited) reading it's never made a big deal that he choose a female host. Of cause being comics no big deal is made about him choosing an ape next, but I can't help reading it with my progressive 21st-century brain. With a quick Central Park aside to show, pretty subtly for comics,
Post a Comment
Read more 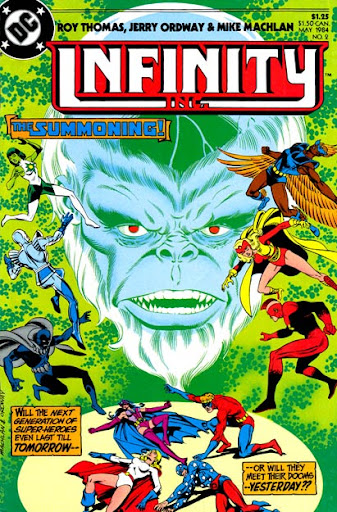 A Gauntlet Hurled Infinity Inc #2  Cover Date: May 1984 Released:   16th February 1984 Even in the second edition, we're still setting up the status quo. So our young heroes decide to get lunch at the not!McDonald's McTavish's (though weirdly Burger King gets a call out). I'm a little sad we're quite a... while from Bat Burger but you can't really blame a forty-year-old comic for missing that trick! As is natural a brawl breaks outs, after what I think are some unfortunate stereotypes try to start trouble with our heroes. It's really a chance to show off what they can do whilst they have the advantage, compared to the fights they've had, and will have before Power Girl and Huntress turn up to offer them their help.  We then cut back to the JSA where the Brainwave goes from his classic Doctor  Sivana look to the younger look he had when we first saw him in All-Stars. Turns out it's actually his son who wants to help the JSA against a potential foe, t
Post a Comment
Read more 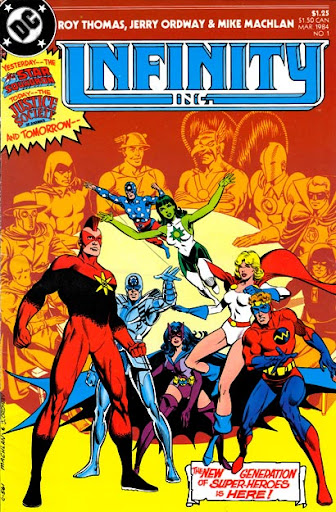 Generations Infinity Inc #1  Cover Date:  March 1984 Released:   22nd December 1983 New Year, new team! Welcome to 2022 to those who are reading along live. And in my perfect timing, the book starts on Christmas Eve with a meeting of the old JSA. Not just the one I've been following in All-Star's but the classic JSAers as well, which makes sense as the point is about handing the torch over between generations. Talking of we start with the JSA having a meeting on Christmas Eve (and yes I appreciate the irony of being just a week or so out), far from the lean team from the end of All-Stars or the now gone team-up this is the full team of Gold, Silver and Bronze age characters. This will be important soon enough. It seems that some threat has bought the team together on the 24th to plan a way to stop the person involved. Into this meeting burst four new heroes, teenagers if Alan Scott's comments are anything to go with, offering to help the JSA with the current threat. Right
Post a Comment
Read more

Now on the Dinah Lance Show - Justice League of America #220 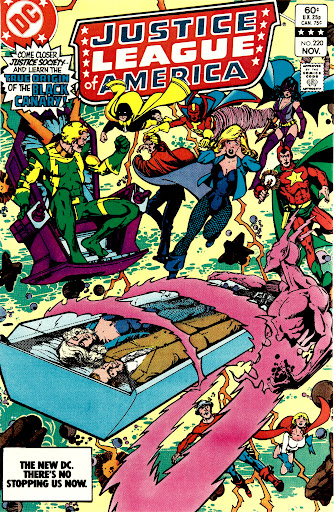 The Doppelganger Gambit Justice League of America #220  Cover Date:   November 1983 Released:   4th August 1983 This is a Black Canary story! No, really there are other scene's with the JLA and JSA but this 20th-anniversary team-up issue is to "fix" Black Canary going forward. I wonder if this was an attempt to move the JLA away from the JSA, what with their comic having been cancelled almost six years before. It would make sense what with they'll decide to do in just three more years! (the shadow of Crisis seems to be following us now!). We start strong with Power Girl rushing off to battle one group of the three teams of villains. before Red Tornado stop her to suggest they split into teams and have a plan of action. She properly miffed as well looking to bust some villains heads, she's also more or less definitely flying here, which makes sense with how long she's been doing this now. Then Sargon turns up and despite being a hero we get probably the most fo
Post a Comment
Read more Who's Who: The Definitive Directory of the DC Universe #18 I was never into Who's Who when I was a wee Symbol, though I do for some reason have a complete set of Gamer's Handbook of the Marvel Universe.  (As a quick aside being the weird-ass person I am almost all the Sci-fi and Superhero properties from that era I'm now into I discovered first through RPG's, no relevance but I thought worth mentioning.) But to tease a little I'll reveal why the Who's Who holds a special place for me with the next issue. Still as cute as the art is, and all the surprint images are from the Power Girl mini if you're interested, it's kind of a shame that a solid decade of character growth and change is reduced down to just a couple of paragraphs. Even worse most of the fluff is about her coming to Earth with only the last two paragraphs covering her times as a superhero.
Post a Comment
Read more 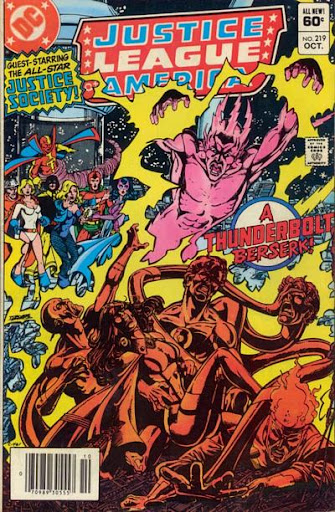 Crisis in the Thunderbolt Dimension! Justice League of America #219  Cover Date:   October 1983 Released:   7th July 1983 Sometimes the star aligns and things work out perfectly, such as the case here where the last two JLA/JSA team-up happen to fall at the end of 2021. When I picked things back up this year I didn't expect to have such a (near) perfect run of weekly blogs running so long, and even then I didn't know this was the last crossover of the two teams. The inevitable Crisis of Infinite Earths is starting to be a looming presence over the comics, something that I'm sure that people of the time wouldn't have known back in the 80s. Even then I've a good six months or more before we get there. For fairness, there is a much reduced JSA/JLA cross over in '84, with not Power Girl, before we start to transition into JSA Detriot! I also must admit here that it's only at the end of them that I've noticed that these crossovers happened every year for the
Post a Comment
Read more
More posts